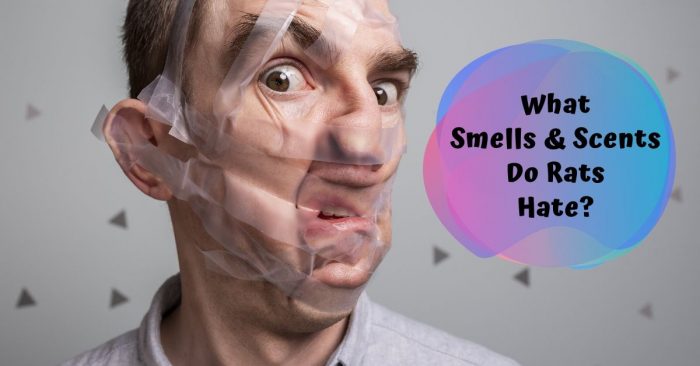 A large population of the world suffers from inherent fear or discomfort from rats and mice. Knowing all the diseases and dangerous health hazards they can cause makes that hate understandable.

As a result, you might be wondering about the methods you can use to prevent a rodent invasion in your house.

If you’re wondering whats smell do rats hate or how to stop rats from invading your house, this article is for you.

Dangers of Rodents on You and Your Family

Rats and mice live mainly in the sewers. Their bodies are smeared with all kinds of potentially dangerous diseases. Rats can be responsible for the transmission of many viruses and bacteria to humans and other animals.

Rats carry dangerous diseases such as Lymphocytic Choriomeningitis (LCMV), Salmonellosis, Listeria, Rabies, rat-bite fever, and Hantavirus, which is transmitted even through dust contaminated with rats urine or feces.

They’ve also played a primary role in wiping out over 60% of Europe’s population during the 17th century in what was called the black death. That’s well over 50 million people!

In addition to fleas, rats can also spread allergens across the house, which aggravates allergies in children and adults.

>> Related: Best Ways to Get Rid of Rodents

What Makes Your House a Candidate for Rodents Invasion?

Rats tend to seek shelter from the surrounding environment. This makes our houses a perfect hideout for them to live and breed.

Since rats can chew on almost anything, given that there’s plenty of food on the other side, they can attack any unprotected house. However, there are some reasons they might consider one house more than the other.

Rats thrive on poor sanitation. If there are more leftovers in the open, or rooms that aren’t regularly cleaned, that raises the chances of rats and mice invading that space.

Similarly, if your yard has nuts or fruits falling from your trees, you might want to get rid of them as they attract all kinds of rodents into your house.

Rats are no average smellers. In addition to their noses, they have a secondary smelling organ called Vomeronasal organ or VNO.

Rats have a highly sophisticated scent reception system capable of detecting even the tiniest changes in the surrounding environment, including pheromones, emotions, and the change of air quality.

That’s why one of the primary ways to deter rats and mice is through using things that give off smells that rats dislike, and it works.

The Biological Approach in Deterring Rats

The first smell that rats wouldn’t take lightly is the smallest of any potential predator. These scents increase their sense of danger and discomfort so much that they can easily evade the scene without looking back.

While the smell of cat, ferret, or raccoon urine might be off-putting for us, it’s a major danger alarm for rats. They also fear the sight of animal hair and fec

es, let alone the sight of the animal itself.

There has been a lot of research regarding this topic. For example, the journal of neuroscience published a research showing that the smell of cats produce strong anxiety and defensive reaction in rats.

Similarly, the American Psychological Association (APA) released a study that shows the intense effect of domestic ferrets odor on the endocrine, behavioral, and neurochemical reactions in rats.

However, a recent field study by Nature shows that wild rats that are more accustomed to living between predators don’t show as much fear from their scents.

The Botanical Approach in Deterring Rats

Recently, more studies are being made to find a safer natural alternative to animal scents and pheromones. Some essential oils showed promise in keeping rats away.

Bergamot oil – Bergamot oil is a citrus fruit that has a strong odor and many benefits on hair and nails. However, there have been countless recent studies that show the anxiety-triggering effect of bergamot oil on rats.

Citronella oil – Citronella is known to be a mosquito repellent used in oil diffusers. However, a recent study by Biopharmaca Research Center showed that inhalation of citronella oil also has negative effects on rats that might draw them off the smell area. Additionally, another publication by the Applied Agricultural University shows that rats also tend to avoid citronella oil.

Can Peppermint and Mothballs Keep Rats Away?

Although there were claims that mothballs can draw off rats, this proved to be an ineffective method for getting rid of rats.

Mothballs contain naphthalene, which is a chemical capable of deterring rats. However, the amount of naphthalene in mothballs isn’t enough to trigger a deterring reaction at rats.

>> Also see: How to Get Rid of Rats Outside

Another myth is the ability of peppermint oil to steering rats away from your house. This claim is also highly debatable due to the contradiction and lack of reliable research results.

>> Related Article: How to Get Rid of Dead Rat Smell

Rats are secretive, and you might never know that your house has rats when their population is low. Once they start to pile up the numbers, they’re going to be forced into the open.

If you suspect the presence of a rat at your house, you can try these different methods in addition to rat traps without the need for professional help.

However, if you can see rats more often in your house, this probably means it’s time to leave the job to a professional rodent catcher or pest control.