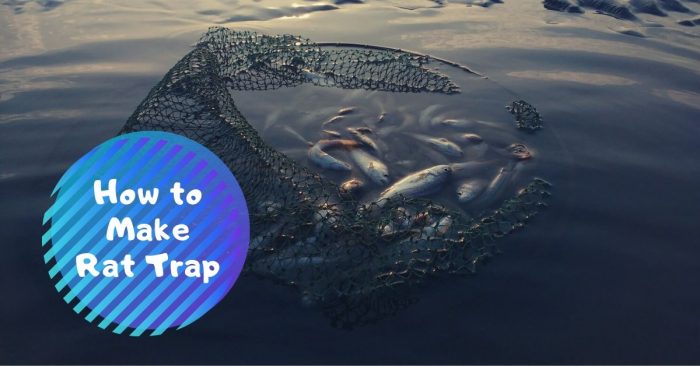 Even if you loved watching Mickey Mouse when you were young, there’s a good chance that you probably wouldn’t want to share your home with their real-life counterparts. Most homeowners have an innate dislike or fear of rats, and given how vicious they are, it’s totally understandable.

Rats have the potential to spread deadly diseases to humans, ranging from Hantavirus to rat bite fever and salmonellosis. Let’s not forget the Bubonic plague, which in the 14th century, wiped out nearly 30% of Europe’s population!

There are several approaches of getting rid of rats, but one of the most humane and effective ways is using traps. You don’t even have to buy pricey rodent traps. Instead, use readily available materials to make homemade traps.

If you’re not sure of how to get started, we’ve highlighted a few homemade rat trap ideas.

For this setup, you will need:

Wrap the soda container with rat bait- such as bacon or peanut butter- and add water to the bucket. On one side of the bucket place the wooden ramp, which the rats can use to climb to the top. If the rat attempts to jump onto the can to feed on the food, they’ll fall into the bucket and drown.

This works in a fairly similar manner to the rolling can above. The major difference is that instead of using a soda can, you’ll be using an upside-down plate.

Place the wooden ramp on the side where the plate is in direct contact with the bucket. Finish off by adding bait on the opposite edge of the plate. The idea is to lure to the rat to climb onto the plate and attempt to access the bait on the unsupported edge. Since the rat won’t be able to balance on that edge, it will easily tip over.

If you don’t want to spend too much time on your DIY rat trap, this glass and coin setup is a superb idea. The only caution you need to take is to use a heavy duty glass like a mason jar. This will prevent the rat from tipping the glass and finding its way out.

Take you preferred glass container and smear rat bait on the bottom section (in the inside of the jar). Preferably, the glass should have a bit of depth to it. The rat baits we recommend using are peanut butter or cheese spread.

The idea is to lure the rat into the glass. When that happens, the coin will fall and cause the glass to come down, trapping the rat inside.

This is another straightforward trap that you can easily create at home.

Start by cutting the bottle so that the top third and the bottom two-thirds are partially separated as shown in the video below. Next, take the top of the bottle with the opening and drill tiny holes on opposite ends.

Attach the bait to a clip, then place the clip on the rear of the bottom unit. Place the clip in such a way that it sticks out slightly to the bottle’s exterior. Use the hanging string to connect the clip to the bottle top. This will force the top part to remain in a vertical position; hence serve as an entryway for the rat.

If the rat attempts to eat the bait, it will try to pull the food from the clip. Pulling the clip further inside will force the string to become loose; thus, close the top unit shut and trap the rodent inside.

If you’re always finding rats in your kitchen, this is the ultimate trap to use. It’s also one of the easiest to set up as all you’ll need is an empty tissue paper roll and rat bait.

For this trap to work, ensure the bucket or bin is tall enough; hence, making it difficult for the rodent to climb out.

When you discover you have a rat infestation in your home, the first thing that you probably think of is rat poison. While these rodent products are effective, they’re not the most humane way of ridding your home of rats. If you have kids and pets, these chemical-filled rodenticides pose a major health hazard.

>> Also read: Best Ways and Methods to Get Rid of Rodents

A better option is to use homemade traps. Not only will these save you money but they also give you an opportunity to release the rats back to their natural habitat. Besides, they are not difficult to set up. Some homemade rat trap ideas include the rolling soda can, flip plate, tissue paper roll, bottleneck and the glass and coin traps.