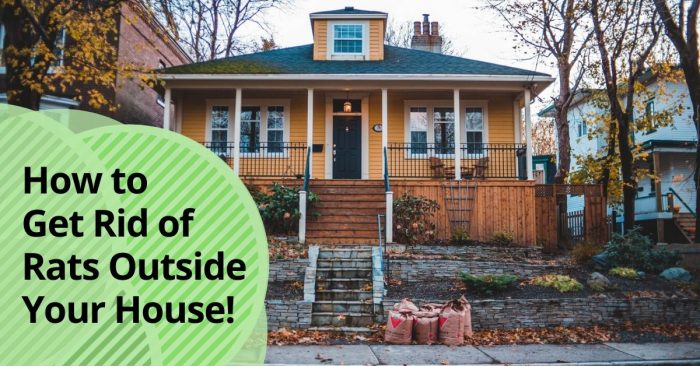 The dreadful sight of a dark, faster-than-the-speed-of-light running object certainly isn’t that pleasant. Especially if you’ve got guests around, and you’d all totally scram at the mere sight of it.

But jokes aside, rats are pretty smart creatures, so catching them won’t be an easy-to-tackle task as you’d think. Rats could also rapidly multiply causing a literal infestation, so once you spot one, don’t belittle your situation! Rats can gnaw and chew on electrical wires, furniture, and generally spread deadly diseases. We’re sure you’ve heard of the black death epidemic which isn’t actually rats’ fault, but they do spread some nasty diseases!

But don’t fret! With a simple understanding of what a rat can’t resist and some guidance in this article, you’ll catch them right away.

Get ready for the hunt, folks!

Rats have definitely seen your porch as a warm, welcoming home sweet home. Possibly due to the abundance of food and the like.  Here a couple of things to start with.

Tightly Cover Your Trash Can

And not just with some lousy plastic bag. Rats can chew it open. Your trash should be covered in a sturdy container, and taken out regularly.

Tidy Up Your Yard/Garden

Rats’ greatest enemy is a clear, open space. Be sure to trim grass, and remove any piles of junk as in old cardboards, stocked up items, and piles of wood and place them where they belong in a tightly-locked storage room. Rats can build nests of paper clippings, grass and the like. If there’s any harvest, be sure to regularly pick it up before rats feed on it.

If you’ve found signs that your harvest may have, indeed, been some rats’ lunch, equip your gloves, and toss it right away. Pick up any fallen fruits, vegetables, and nuts from the ground. Eliminate any food sources.

Left out pet food is one, too. So it’d be better to feed your pet inside. If you’re an avid bird feeder, don’t scatter food on the ground. Create bird feeding stations that rats couldn’t access. Rats only require ½ an inch to enter any space so make sure your storage room, garbage bin, or anything at all has absolutely no cracks.

Finished clearing up your yard? I advise you to tightly secure your house as well because finding a rat running around in your bedroom would be extremely annoying. Eliminating rats can be done by either rat poison, or using traps. Let’s discuss them in detail.

Rat poison contains rodenticides that may be either:

Most rat poisons containing acute toxins are no longer around as it may cause accidental poisoning for the person applying it. Zinc sulfide is only approved for agricultural use.

The most popular rat poison available right now is bromethalin.

This type works by damaging the rat’s central nervous system which ends up paralyzing it and ultimately, death ensues. It’s the safest type of rat poison to be used around homes.

It comes in the form of grains, pellets, powdery substances, seeds, or blocks of paraffin.

Using rat poison isn’t the best option in the slightest. First, you’d always have the risk that your children or pet or anyone for that matter, may come in contact with it. Second, when your rat ingests poison, it doesn’t die instantly. Poison requires needs at least 3 days for it to cause death.

Now here comes the problem: The rat may die in an extremely narrow, unaccessible corner, and decompose. That’s where it becomes ugly. A terrible stench comes off and of course, bugs, worms and the like.

>> Also read: How to Get Rid of Dead Rat Smell

Aside from that, animals that feed on rodents may get poisoned themselves if they feed on a dead rat that has ingested poison.

Now, traps come in various shapes and sizes as well as mechanisms.

There are so many other gadgets like those that use ultrasonic waves and remedies like mothballs, peppermint oil, black pepper. However, truthfully, from my own experience, these things aren’t so effective so don’t bother.

[May: Judy & I are strongly against using glue trap as we see it as a cruel way to get rid of rodents]

Set it up, and put some peanut butter as bait on the designed area. Here’s how most cage traps are set up.

Place the trap in your garden/yard and be sure to cover it with some bushes, leaves or a light plastic bag. Try not to make it seem like a trap as much as you could.

Take care not to place objects for camouflaging purposes in a way that may hinder the trap to close shut. After catching the rat, put on gloves to handle the trap. Release the rat in a far, secluded area to prevent it from intruding upon others’ houses or yard.

After using it, wash it off with some sanitiser and dry it off to prevent rust. That washing part is extremely important because your next hunt may notice a rat’s scent in your trap which may scare it off.

If you think Cage-traps are too much of a hassle, opt for electronic traps.

Set the trap as per instructions, and keep out of the reach of children. I always recommend using peanut butter as bait, or dried fruits.

Contrary to popular belief, these attract rats and mice way better than the traditional slice of cheese. Always wear your gloves when handling rats or anything that rats may have touched.

Dispose of the rat’s body in a garbage bag. Sanitise your trap while taking care not to damage it, and store it for next use.

While I do hold no personal grudges against rats and mice, and I’m sure you don’t as well, these guys are just worrisome and scary. They do cause lots of trouble, however, it’s essential to try to be as humane as possible with them, they’re just animals!

>> Related: Best Way to Get Rid of Rodents