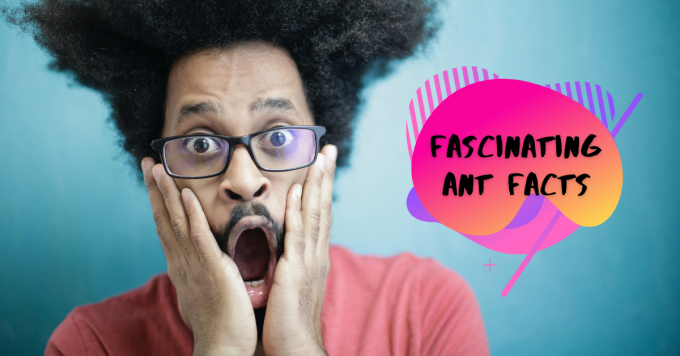 Ants are hardy insects that you can find almost anywhere. This versatile and tiny insect also has lots of  hidden facts that will surely fascinate you and your kids. Here are some of the most interesting ant facts that will make you look at them differently the next time you see one:

Like all living creatures, there are many different species of ants on earth. To date, there are more than 12,000 known species of ants found globally. Take note that some ants are endemic to a particular area. Yes, even the coldest areas on the planet may have ants.

A tiny ant can lift up to 20 times more than its weight. This is why you can find ants lifting leaves, twigs, dead insects, debris, and food particles that are many times larger than their size.

3) A queen can give birth to millions of children

A queen ant has the most important job in a colony. A single queen can give birth to millions of children over its many years of living, hence they are often well protected by the soldier ants and are mostly found living in the middle of the nest.

4) Ants hear with their feet

Another possible reason why ants move in a single file is to follow a trail made of pheromones. These are natural chemicals emitted by ants that tell other members of the colony where to go; usually, the trail that leads to food.

Aside from listening with their feet, ants breathe using different holes that are found all over their bodies. They don’t have lungs, and from these holes, oxygen moves in, and carbon dioxide moves out.

Ants are social creatures living and working together in groups to build the ant colony. Some ant colonies have thousands of ants while the biggest colony can have millions of these tiny insects.

8) The three kinds of ants in an ant colony

In an ant colony, there are three kinds of ants: the queen, who is the most important ant in the group, the worker female ants, and the male ants. Only the queen and males have wings.

9) There can be one or many queens in one colony

There is only one queen, and rarely is she replaced. When she dies, the group may not survive as she is the only one who can reproduce.

10) Soldier ants can and does attack other colonies

Soldier ants are ants with roles primarily to protect the queen. Sometimes, they do also attack other ant colonies in order to get food.

11) Carpenter ants will leave inside wood

Carpenter ants are the most destructive because these lay their nests in wood. The colony of a carpenter ant has only one fertilised queen, and she lays her nest inside a hollow part of the wood.

The odorous house ant may smell like rotting coconut when you crush them. These ants are very social, and their nests may have 100,000 or more members.

13) Pavement ants live in the soil underneath pavements

Pavement ants are very common and will build their nests under pavement or in the soil underneath. They move through the many cracks of the pavement.

14) Red Fire Ants can form large balls in the water

When their nests become flooded in water, RIFA will drop in water and even form large balls just to float and survive. RIFA can also cause severe damage to crops.

Longhorn crazy ants move in erratic and jerky movements when they are looking for food.

Ghost ants are very hard to see because of their very pale color and minute size. These are found only in tropical areas like Asia and Africa.

Pyramid ants have a weird-looking pyramid-like structure found on the top of their heads. These are naturally found in the United States, especially in the southern states. These ants will also smell like rotting coconut when these are crushed.

These ants are black to brown, but their feet are pale white to pale yellow. The colony of a white-footed ant can have as many as 3 million ants.

And there you have it, 18 quick and unique ant facts that you can share with you kids or keep for your own knowledge.

If you are facing any ant infestation problems at home, do check out these useful articles: