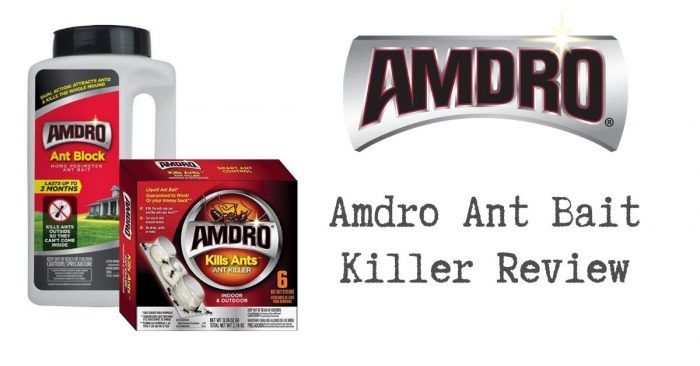 Scientists have always been fascinated by the high level of organization that these tiny creatures display. Studies have revealed that ants can join together and form life-saving ants when faced with a flood. They even have a way of selecting their next queen. However, it’s not interesting when these pests decide to share our home. They can wreak havoc on your equipment, appliances and structures depending on where they lay their nests.

I have had to deal with a pest infestation at least once in the past, and I know how tough it can be. Though I’ve never had an ant infestation, I’ve learned from my experiences that baits work fairly better than bug sprays and killers. In our post, we’ll focus on a highly-effective ant bait. Here’s a detailed Amdro ant bait killer review.

There are at least 12,000 different species of ants that exist. This means that identifying the specific kind of ant that’s invaded your home might be a little difficult. Good news is, some species are more likely to be found indoors than others. Identifying the species of ant is vital because it enables you to narrow down your ant bait options. Each ant bait contains an active ingredient that’s better suited for eliminating a particular ant. For instance, carpenter ants are best dealt with granular ant baits containing Abamectin.

Placement of the Bait

Another tip that will help is identifying the location of the ant colonies. This will determine the ideal type of ant bait to use. Ant baits are available in 3 main forms:

It can be devastating if an ant infestation re-occurs. However, this can only mean that you did not tackle the issue correctly the first time. Perhaps, the queen ant survived and moved to a different spot to establish another colony.

To avoid such scenarios, you should invest in ant bait killers that are proven to be effective. Ideally, they should have a long-lasting effect so that they keep your home pest-free for longer.

AMDRO is a reputable and well-known brand in pest control products industry. With experience that spans over 40 years, it’s not surprising that their ant bait killers come highly-recommended.

While this company makes several ant killers- including a few that are formulated to target specific species like fire ants- we’d like to focus on two quality and efficient ant baits.

These are the AMDRO Liquid Ant Bait and AMDRO Ant Block Bait Granules. They’re both great for eradicating ants. The only difference is that the first one is in liquid form while the latter comes in granular form.

Performance – Based on our tests, the Amdro Liquid and Granules ant baits were very effective in eliminating ants.

The active ingredient in the liquid ant bait is borax. This is a naturally occurring mineral powder that operates by killing the ants slowly. Essentially, its effects kick in gradually, allowing the worker ants ample time to take the poison back to the colony.

By contrast, the active ingredient in Amdro ant block granules is Hydramethylnon. This is a chemical compound, which is designed to control an array of insects including ants. It works in a similar manner i.e. luring worker ants to pick up the granules and take them back to the colony.

According to Amdro, the ant block granules can be used against carpenter ants, fire ants and 23 other ant species.

Design and Application – Another reason why Amdro ant baits are popular is because of their ease of use. The liquid ant bait comes set up in the form of several ant bait stations that are ready to use. Thus, all you have to do is place the bait stations in strategic locations or where the ants visit frequently.

The ant block granules also come in an easy-to-use bottle, which has a circular nozzle. This gives you two choices from which you can pour the granules: a large spout and a sprinkler-style opening. If you’re spreading the granules on a large surface area like your garden, the larger spout is the best option.

Longevity – According to the manufacturer, the Amdro ant baits kill the queen within a week of application. This means that after about two weeks from the date of application, the entire colony will be destroyed.

The only caveat is that you cannot apply them on a wet surface as the moisture jeopardizes their efficiency. So if you’re planning to apply outdoors, be sure you’re spreading the granules on dry soil.

But what I like most about Amdro ant baits is that they retain their potency for up to 3 months. This gives you enough time to destroy the current colonies and deter future ants from invading your home. Even better, the manufacturer provides a generous portion of the ant bait at a very reasonable price.

The ant block granules can be purchased in a 12- or 24-ounce bottle. The 12-ounce can cover 540 linear feet while the latter covers 1080 linear feet. In the case of the liquid ant bait, you’ll get 6 ant bait stations that you can set up throughout your home.

If you’re looking for a substitute, the Combat Roach Killing Bait is just as effective for fighting ants.

This product is actually a bait station, which is equipped with hydramethylnon as the main ingredient. Given that this is the same ingredient used in Amdro ant block baits, the Combat product is equally effective.

The main difference between the two is that Combat gives you a mess-free approach of dealing with the ants. Instead of having to sprinkle granules all around your home, the bait station lures the insect into the device, which then carries the poison back to the colony.

If the Amdro liquid ant killer bait is not available, you can consider the Terro Liquid Baits. These are specifically formulated to kill household ants.

Like Amdro Liquid bait, this compound contains borax as its primary ingredient. This means it also works through a slow-acting mechanism, which makes it effective against entire colonies.

The key difference between the Terro Liquid Baits and Amdro Liquid version is that the former contains more bait stations. So while Amdro provides only 6 bait stations, Terro contains 18 stations for a slightly higher price.

Have you been struggling to get rid of ants from your home? If you have, consider investing in Amdro’s line of ant baits. These contain slow-acting agents, allowing the ants enough time to take the insecticide back to their colonies. Also, the baits are incredibly easy to use, and boast long-lasting effects. Check out the product by clicking here.