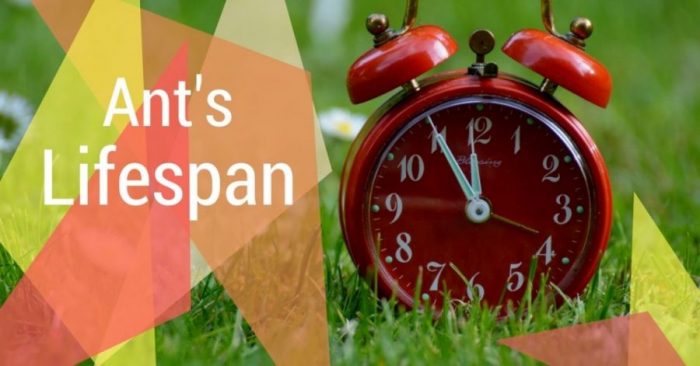 Ants generally have short lifespans and it differs from one species to another. This guide will help you understand the life cycle and lifespan of these highly social creatures.

All species of ants undergo numerous developmental changes in their lifetimes in a life cycle process  commonly known as metamorphosis (similar to that of a butterfly).

The life cycle of ants from egg to a fully growth adult can take between a few weeks to one year, depending on the environment in terms of whether conditions and availability of food.

Egg – After mating takes place, the queen lays eggs. The unfertilised eggs become male ants and the fertilised ones become the female ants.

Larva – The egg hatches into larva which has the shape of a warm and no legs or eyes. Larvae grow so quickly in favourable environment and if they are fed well by the workers.

Pupa – Larva then metamorphoses into pupa, which resembles the adult ant, except that their wings and antennae are still folded against their body.

Adult – The pupa eventually grows to a full-grown adult ant, with exoskeleton that prevents it from harm and from becoming any larger.

There are various factors that determine how long ants can live.

Generally, ants preserved in the laboratories live longer than those in the wild. This means, majority of ants die early due to unfavourable environmental conditions like the presence of predators and scarcity of food.

The Ant colony comprises of the males, queens and workers.

The ants’ survival is solely dependent on the availability of quality of food, the environment and weather conditions. Scarcity of food especially, becomes a threat to the lives of the worker ants as they sacrifice themselves to gather resources for the entire colony and to take care of the young.

>> Related article: What Do Ants Eat

Different species have got different lifespans. Below are  some of the common and interesting ones (see article: black vs Red Ants).

Harvester Ant – The most common species with many sub-species. Their workers mostly live for just a few weeks to a couple of months, while the queen can live for over two decades (one of the most long-lived ants).

Fire Ant – Fire ants closely resemble the harvester ants in terms of behaviour, and are among the most aggressive species with very painful sting. The workers can live for about five weeks while the queens can live up to seven years.

Field Ant – These ants don’t enter humans’ homes in search for food. They prefer searching for food in the fields and are known for producing huge mounds for their habitat. The queen can live for ten or more years.

Carpenter Ants – These ants are the largest species in terms of body size and are common around homes. The queens can live for more than ten years, while the workers have lifespans of several months to seven or more years. The males die a few weeks or months after mating.

Ants are known for their resilience and teamwork. Studies have shown that these creatures have been around since approximately 130 million years ago and when the dinosaurs faced massive extinction, they survived it.

The world’s ant population is estimated to be over ten thousand trillion, making the entire human population of about 7 billion quite insignificant.