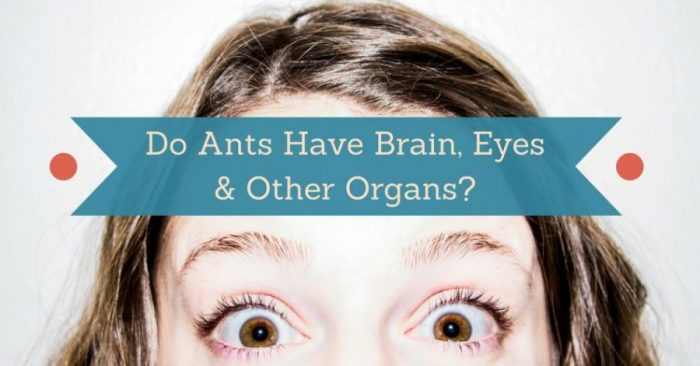 This guide answers the questions to whether ants have brain, heart, eyes, lungs, blood and wings as well as explains their formation, appearance, size and function.

Just like humans, ants require food and oxygen to live. As such, they do have body organs for digestion, sensory and control. However, their biological system is totally different from humans’ and other huge animals in terms of organ structure, size and function.

Do Ants have Wings?

Yes but not all of them. Reproductive males (drones) and females (queens) develop wings which enable them to take flight (known as nuptial flight) in search of place to mate and breed. After mating has taken place, the queens will eventually lose its wings.

Sidenote: It is believed that the queen’s ability to grown wings is to ensure breeding takes place far away from home to prevent unnecessary competition within the colony as well as prevent mating between relatives.

Do Ants have Brains?

Absolutely. An Ant’s brain is pretty tiny and contains 250,000 cells, as opposed to the human’s 10 million brain cells. It enables them think, remember and react to their surroundings. Though small, are known for being wise in terms of communication, courtship, food finding, bringing up their young ones and avoiding predators.

Do Ants have Hearts?

Yes they do. The ant’s heart is shaped like a tube and runs from the head to abdomen, and is enclosed by tiny muscles.  Their bodies do not have veins or arteries to allow the flow of haemolymph (ant’s blood). Instead, they have an open spherical system that presses blood to all parts of the body when the heart contracts.

Do Ants have Eyes?

Yes they do, though their eyesight is quite poor. In fact, some species are completely blind and use reply solely on their antennae for direction. Some species however, have perfect eyesight (like the Australian bulldog ants and weaver ants). They can see and determine the size of objects from a distance. Their eyes are comprised of numerous identical closely-arranged facets known as ommatidia.

In general, ants can comfortably live and function without eyes, simply by using their sense of smell, touch and taste detected by the antennae. If an ant finds food, a chemical trail (known as pheromone) will be left to guide the rest over.

Do Ants have Lungs?

Ants don’t have lungs. Since they have no blood vessels, they breathe through small openings all over their bodies, called spiracles. The breathing system contains a network of very tiny tubes (called tracheae) that extend throughout the body to supply oxygen. Oxygen enters through these holes and carbon dioxide leaves through the same.

Do Ants have Blood?

Somewhat. Ants have haemolymph which is equivalent to human or big animals’ blood and serves the purpose of transporting metabolic products as well as nutrients. This liquid contains 90% plasma and 10% blood cells and is in yellowish or greenish colour.  However, haemolymph does not transport oxygen as human blood does.

Other Facts About Ants

Like humans and vertebrates, ants and insects have some forms of organs for survival otherwise they would not be in existence. In general they have circulatory system, digestive system, muscular system, nervous system, endocrine and reproductive system.