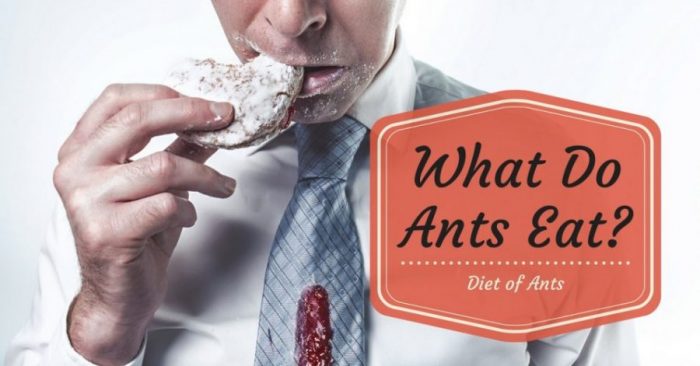 Every wondered what do ants eat? Just like humans, different ant species have specific eating habits. They have mastered the seasons and are able to trek long distances to find food and store some for future use.

There are over 12,000 ant species around the world. While they feed on a large range of foods, from meats to fruits to oils, some species prefer certain diet over the others.

Some ants are considered wild and others household pests. In fact people refer to the household ones as “sugar ants” or “kitchen ants”. If not gotten rid of using pesticides, they will eat all kinds of food at their disposal. Some, like fire ants, are harmful to humans and should be kept out of homes. Other wild species are considered predators as they kill and eat other insects.

Here are some of the most common ant species and their diet preferences:

Black House Ants: The shiny and black ants are such a nuisance in kitchens and garbage areas. They are mostly attracted to meats, grease and sweets. They are potential in spreading diseases such as salmonella.

Carpenter Ants: The workers are usually ¼” long and queens ½”. Night hours are their preferred hunt time. They build their nests inside wood by hollowing it. They are quite harmless and are attracted to honeydew, sugary substances, grease and meats.

Fire Ants: Their common diet include honeydew and dead animals, insects and vertebrates e.g. eggs, mice and baby birds. These ants are found everywhere around the world and very harmful. Nothing grows around their nests as a result of that.

Ghost Ants: They’ve got pale abdomen and legs and easy to be identified. They are mostly attracted to high humidity areas like kitchen and restroom cabinets. Grease, insects and sugary substances are their daily bread.

Pavement Ants: The swarming insects feed on close to anything. You will find then along the corridors, pavements or paths, trying hard to carry heavy pieces of food like bread crumbs, honey combs, chewing gum etc.

Garden Ant: The dark brown colony consists of both workers and queens and are totally harmless. Interestingly the males die after mating! Sweet protein foods are their preferred dish. Their nest areas are easily identified by the presence of very fine soil around the exit holes.

Leaf Cutting Ants: They are naturally herbivores as they eat a specific type of fungus, which comes from chewed up remains of flowers and leaves that they themselves chew in their nests so as to allow fungi to grow on them. They are mostly found in tropical woodlands.

There are several factors that contribute to the ant eating habits and food choices. They include ant species, location and time of the year. For instance, ants require plenty of protein diet including seeds, meats, eggs, nuts and insects like snails and termites immediately after the winter season as their focus is normally to reproduce. After the eggs have hatched, their diet shifts towards carbohydrates which include nectar, pastries, molasses, grease etc.

When it comes to searching for food, ants can travel a distance of two football arenas. Once food is identified, a trace of pheromones will be left to guide others.

Ant classifications based on eating habits:

Omnivorous: These ants eat all types of food (plant and animal).

Carnivores: This category feed on meats from dead animals.

Herbivores: They are logically adapted to feeding on plant material.

Predators: These ants kill and eat other ants.

Insectivorous: They love feeding on worms, insects and other small invertebrates.

Fungivorous: These ones feed on mushrooms and fungi.

In the case of predators, they can go as far as invading other ants’ nests and eat their eggs or young ones. If the queen is hungry and there is no food available for her, she will eat up her young ones. Species like the army ants are capable of killing even large animals for food.

Despite the fact that ants eat just about anything, majority of the species feed on sugars and honeydew (liquid formed by aphids and other plant-sucking insects after eating plants). It is amazing that several ant colonies kidnap and milk aphids to ensure there is enough supply of the residue. For that reason, by the way, aphids and ants have always co-exited peacefully.

As earlier mentioned, ants are naturally attracted to sweet foods, certain plants, insect corpses, protein rich and water. Here are some foods that ants do not eat:

Spices: Cinnamon, cayenne pepper, black pepper, cloves and bay leaves can be used as ant repellants in homes by sprinkling some around the kitchen windows and doorways.

Sour citrus: Lemon juice and citrus oil are highly feared by ants, which also makes them effective repellents. Simply dilute fruit juice and sprinkle it around the ants prone areas.

Cucumbers: This type of vegetable is very bitter when raw and much avoided by ants. In order to use it as a repellent, simply soak a few slices of it in water for a couple of days. After that squeeze the rest of the sap out of the cucumber into the fermentation. Sprinkle the concoction around the doorways, windows etc.

Ants are the busiest and wisest amongst living creatures. Many species observe teamwork as their best strategy in food-hunting.

They are naturally opportunistic pests and therefore, abandoned foodstuff in your house can turn out to be an invitation to them. Always keep your kitchen as tidy as possible. Regularly empty your dustbins and keep your remaining cooked food, fruits and fresh vegetables refrigerated. Tightly, seal your food covers and cans as they can easily be accessible by these small-bodied creatures.

Use pesticides to keep your home free of ants. Ensure no remains of food on all the surfaces. Seal all the gaps and unnecessary openings on your windows, doors and walls so as to enjoy a comfortable and pest-free environment.