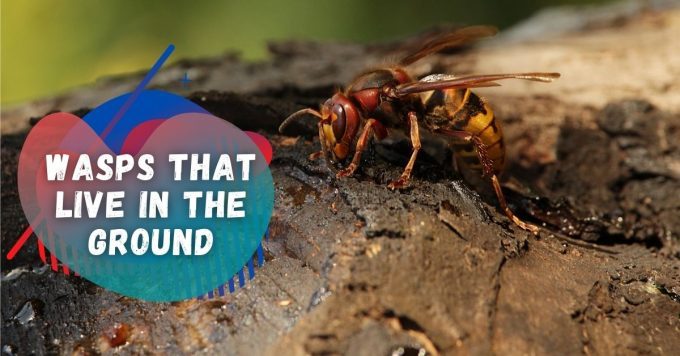 Wasps are extremely aggressive and dangerous insects that sting real bad. One may panic if they see a wasp flying around their home. But do you know what’s more dangerous than an aerial wasp lingering around your living area? Ground wasps that are silently nesting under the ground, without you knowing.

Ground wasps are a lot more dangerous than aerial wasps because you won’t know they’re there – unless you get attacked. Ground wasps are often found in colonies of hundreds and thousands under the ground, hiding, and attacking if they feel threatened. The worst thing about these wasps is that most varieties attack in territories. You’ll have an entire gang of wasps hungry for your blood if you disturb their colony.

Not many people know about these wasps, and for this reason, the infestation of ground wasps often goes unnoticed. We’ve listed down some common wasps that live in the ground so that you’re able to identify them when you see one.

>> Also read: How long does a wasp live? 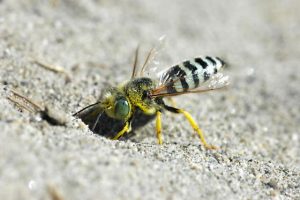 Mostly found in Europe, digger wasps, as you can tell by the name, make their nests by digging tunnels into the ground to look for their potential food source, which mainly includes dirt and debris of other dead wasps. Their body structure looks similar to other wasps that live on the ground with 2 wings and a noticeably thin mid-portion of the body between their neck and the abdominal part that distinguishes them from the rest of the wasps.

Digger wasps are known to have a friendly behaviour that enables them to connect with other wasps. They usually have a social circle and move together with their counterparts to survive in a habitat. The unity among the digger wasps allows them to live in a family set up where the females lay eggs and look after their children.

Cicada killer comes under the family of digger wasps, yet sometimes, people assume it as a form of hornet due to the mutual characteristics of the two wasps. As the name implies, they are known for their eating habits. As soon as they invade a certain space, they kill cicadas to lessen the number of cicadas alive so that the plantation could be safe from destruction caused by them.

These wasps are very aggressive. They’re nothing short of a nuisance and an alarming danger in outdoor spaces. Yellow Jackets are predatory. They live in huge colonies comprising of 4000 to 5000 fellow wasps. If these wasps feel that their nest is threatened, they attack as a colony that makes them all more dangerous. Yellow Jackets are usually the size of a bee and have characteristic yellow and black markings on the front of their head and a yellow-coloured abdomen. Their face is mostly yellow. Hence the name, Yellow Jackets. Due to their physical appearance, they’re often mistakenly taken as bees.

Wasps that live in the ground are mostly territorial and social, which means they exist in colonies. Identifying the infestation early on can be a challenge. It’s only when your children are playing in the backyard, and they accidentally disturb them, that you realise that you’ve had a predator insect colony living right under you!