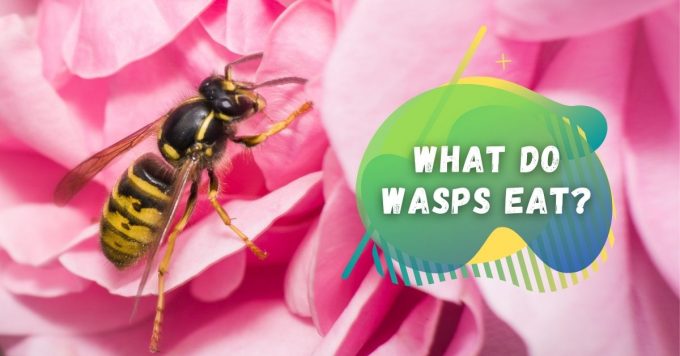 While all wasps mostly rely on a mixture of insects and nectar, there are some differences in the food they enjoy. Knowing what wasps eat can help homeowners prevent wasps from forming a colony in a person’s garden or home. While wasps are definitely beneficial to the ecosystem, their stings are known to hurt.

Here are the top 10 foods that wasps like to eat:

Wasps tend to eat both solids and liquids that they forage for from different sources. They aren’t restricted to any particular source of nutrition either, so they have a lot of variety in their diet. They are largely omnivorous creatures surviving on flowers and insects.

What Do Wasps Eat?

All adult wasps need nectar and pollen to survive. It is rich in protein (up to 61%) and essential for wasps to maintain themselves. Wasps have a special part of their mouth that allows them to suck up the nectar and other sweet liquids from flowers.

Paper wasps are the most common type of wasps. They have yellow and black colours, which are most easily recognised as stinging pests. This species of wasp hunt on different insect prey such as caterpillars, spiders and other insects that we often see as garden pests too.

When the adult paper wasp finds its prey, it grabs it and injects it with venom that can disable or even kill it. Wasps are ruthlessly with their prey, often dissecting the victim before returning to their nest to feed the wasp larvae.

Wasps like hornets also kill with their stinger. They often target the flying insects that lurk around flowering plants, cattle, horses, and other such animals. Other food sources include honey and fruit, from which they consume these sweet liquids.

Another interesting food that wasp feeds on is the Trophallaxis, a clear liquid that contains sugars and amino acids, produced by the wasp larvae. The Trophallaxis is to the wasps much like caffeine is for humans, and wasps can even get addicted to this substance. When the nest is not fully mature, the adults outnumber the larvae, and a shortage occurs; wasps can even get more aggressive when they don’t get this substance (similar to how drug addicts get when they don’t get their fix).

When the nest starts to mature with more larvae, the wasps can become less dependent on their nests as food sources. This is why in late summers and early autumn, you may find more drunk wasps who have consumed too many alcohol-filled fruit juices.