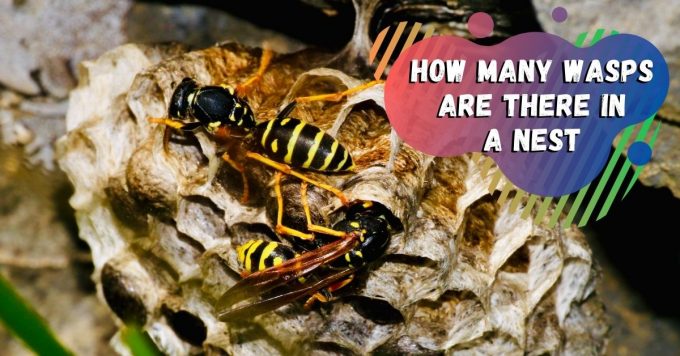 If you’ve been noticing too many wasps inside your home or in your backyard lately, there’s a high probability that there’s a wasps nest somewhere. You may not take a wasps nest seriously, it’s just a nest after all, right? However, if we tell you the number of wasps that a wasps nest can accommodate, you might freak out – and you should.

A wasps nest may appear to be a small ball, but it can house a huge number of wasps. We don’t mean to freak you out – just giving you a heads-up that if you see a wasps nest at your property, you better take it seriously.

How Many Wasps Are There In A Nest?

Several species of wasps are socially connected with each other and survive together to live inside a nest. The nests they form are usually made up of the fibre extracted from plants as well as the wooden stem surrounding the plants. Along with the wasps’ secretions and mud, followed by resin found in plants, the nests are built by the wasps. The nests are constructed in the design of a honeycomb that makes them very attractive.

A single wasps nest means thousands of wasps, and the number tends to increase when the weather gets favourable for the wasps. The quantity of wasps living in a nest varies according to different seasons within a year. Most of the time, the nest built by the wasps can accommodate around 10 thousand to 15 thousand wasps, followed by 1,500 to 2000 female counterparts of the wasps that are known as the queens.

A nest may not appear too big, but the surface area of a wasps nest is reasonably large that can accommodate thousands of wasps at a time. A wasps nest consists of innumerable hexagonal cells, which makes enough space for the massive number of wasps that a wasps nest can house.

Where Can I Find Wasps Within My Home Or Surrounding Area?

If you suspect that there’s a wasps nest somewhere around your property, the following places are where you should be looking:

>> Also read: What does a wasp nest look like?

It is important to get rid of wasps as soon as you see a nest. Search for them in the summer and spring seasons as a number of wasps are likely to invade your house or living space. You should try your best to kill them whenever you see them anywhere near your house or even inside your home. Ideally, you should use a specially formulated wasp killer spray during the night or when there is less intensity of light in a room. You can also make use of specially designed lights in darker shades to work on your wasp-killing strategy and kill them effectively and efficiently.

What Do Wasps Eat? (Here Are 11 Foods They Enjoy)
Wasps That Live In The Ground
Best Time to Spray a Wasp Nest
How to Get Rid of Hornet & Wasp Nest (Wasp Nest Removal)
How to Treat Dogs Stung by Wasps? | Signs for Allergic Reactions
Best Hornet, Wasp and Yellow Jacket Trap (2022 Edition)
Wasps Lifecycle (Spring Through Winter)
Raid Wasp & Hornet Killer Review