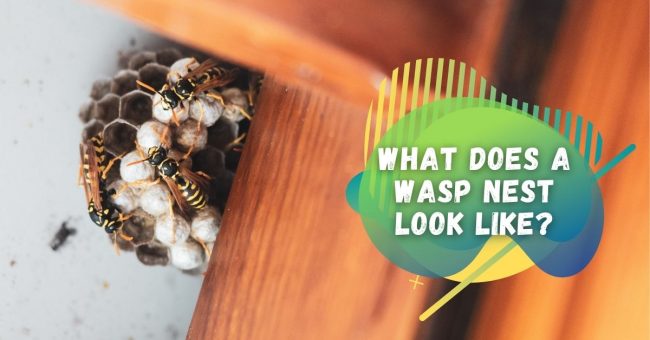 Wasps definitely do want any humans coming near their nest since they are quite protective of it. It is important to understand that they can be beneficial to the world when they are balanced since they are pollinators too. However, it is vital that you know what wasp nests look like so that you can avoid them! They do tend to sting, which can hurt a lot.

The nest of a wasp can depend on the number of adult wasps living in the colony, the species, and if they are social or solitary wasp species. They do tend to build quite fantastic structures that can even compete with the elaborate honeycombs made by bees.

Yellowjackets tend to create nests on the ground, while paper wasps tend to form their nests on the eaves of any building. Some wasps also create nests that hang from tree branches. Aerial nests for wasps are grayish-green, straw, or grayish colored. It has a papery feel to it that looks like gray paper stuck together to form a nest. The papery-looking “leaves” are stuck in an overlapping way that turns them into a spherical shape.

How Do Wasps Make Their Nest?

Researchers have noted that wasps are amazing architects. The structure of their nest has neat cells in hexagonal shapes where all the young are kept and reared. These cell structures are an efficient way to utilise the space in the nest. All the different compartments fit together perfectly but use the least amount of materials needed. This creates efficient use of the minimal resources that wasps have. They look similar to the hexagonal shapes made by honey bees.

The cells of the nest are made using thin wood scraps that wasps gather from garden furniture, logs, fencing, and other such items. These wood scraps are mixed in with the saliva from the wasp that breaks down the fibre. It turns into a pulp-like substance that is used to build the interior of the nest. It is quite similar paper making!

If you are worried about wasp nests in the garden or around your home, you should make sure to call professionals to deal with them. Their stings can hurt, and leaving them alone is a good idea if you don’t know how to handle them properly.