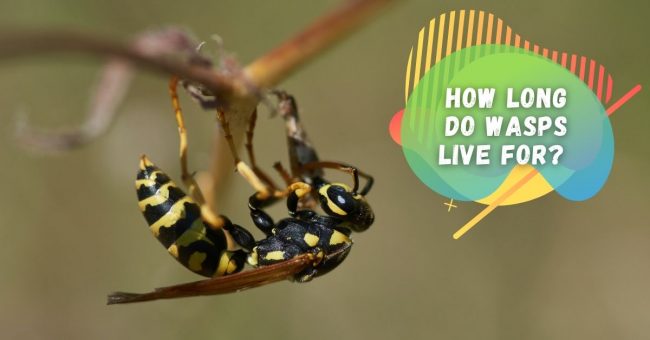 Wasps can be quite a nuisance as they tend to sting anything that comes close to their hives. They pop up around the spring and summer times each year. These bugs are definitely scary because their stings can cause a lot of pain, both mentally and physically. If you’re dealing with a wasp problem on your property, you may want to know, “how long do wasps live for?”

Paper wasps are also called Polistes, and they are known as social insects. They have three caste systems that their colonies are based on, known as males, workers, and queens. After fertilisation, the queens spend the winters hidden in sheltered places like the crevices of a house, under tree barks, and other secure places. The queen chooses a nesting area and builds the nest for the colony during the springtime.

The eggs hatch into larvae, where the paper wasps develop until they emerge as adults. The worker wasps do most of the work as their name suggests. They are in charge of building the nest, feeding the young, and protecting their nest. One nest of paper wasps can hold up to 20 to 30 adult wasps. The queen tends to stop laying eggs by the time late summer rolls around, whereupon the colony usually dies off.

This means that the queen survives for 10 to 12 months while the worker wasps survive for 3 to 4 months.

Yellowjacket wasps are also known as Vespula Vulgaris, and they are social insects as well. Their nests are usually quite big, up to the size of a regular basketball. They have similar nesting habits as that of paper wasps; the queen looks for a shelter during the winter and nests during the springtime.

The yellow jacket queen is able to store sperm for a long time, which means that it lays eggs through the summer. The life cycle of the queen wasp for yellow jackets is 10 to 12 months. Since these wasps are social creatures, they build their colony based on the mating system. The purpose of the wasp is to mate and create offspring. Any wasps that don’t mate, male or female, die off by early fall or late summer.

If you see wasps around your home or in the garden, it is highly likely that there is a full nest nearby. It is important to remember that wasps are dangerous creatures, especially if you don’t know how to handle them properly. The insects are known to get quite hostile if the nest gets disturbed, and they are keen on stinging too. If you are allergic to the stings, it can be fatal too.

Now that you know the answer to “how long do wasps live?” you should have a better idea of when to call an exterminator, or even when to just avoid these creatures.