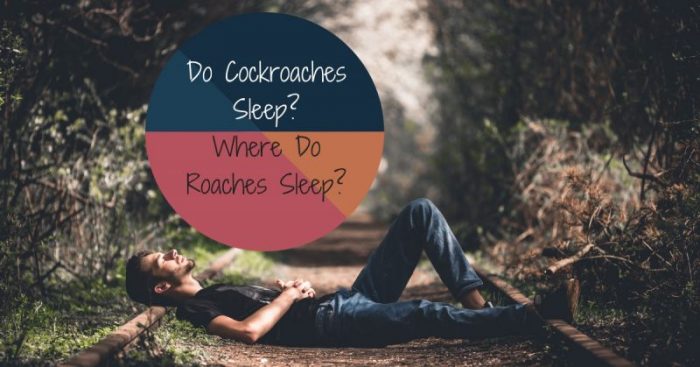 ‘Everyone gets to face a roach infestation at home one time or another in every part of the world’. I’m sure you’ve noticed that roaches are the greatest culprits that are most active at night. That being said, we do also notice movement from these nasty creatures during the day, thus bringing about the question, do these pests even sleep and if they do, where and when do they actually sleep?

In this article, we seek to understand about roaches and their sleep behaviour. Do they need eight hours of sleep like human or are they like zombies. Can they sleep practically anywhere or there is a need for a resting area. We shall learn more on them in this article.

Studies have been conducted on how roaches sleep and in accordance to Professor Irene Tobler-Borbely, she mentioned that roaches has three state of activity; locomotion, limb or antenne movement. Quite interestingly, humans and roaches have the opposite sleeping pattern though both are the circadian rhythm.

What is a Circadian Rhythm?

Cockroaches are species with activity rhythms; sleep during the day and search for food during the night, which is usually four hours after lights out. Roaches are like humans, they follow a circadian rhythm; activity cycles which responds accordingly to 24 hours of light and darkness. Respectively, sleeping in the day and being active at night which is synchronised to the environment based on their internal activity clock.

As such weather can also affect their internal rhythmic clock. This rhythm is controlled by sub-oesophageal ganglion. In a study, there is the saying that even with artificial lighting at night, the activity of the roaches can be disrupted. Scientifically, roaches have eyes which can see well in green light but not red though they have over 2000 lenses which allows for excellent vision. Thus the eyes detects the dark or the light and then transduce the signal which links to the optical nerve and heads to the optic lobe which is the internal clock.

The circadian rhythm can be disrupted due to various reasons, for humans it is obesity, cancer etc. For pests, mother nature.

When are Roaches Active?

Roaches are morons in the day and experts by night. In a research by Terry L. Page, roaches are modulated by their circadian clock. Being nocturnal, these species are known to be active with darkness and areas without movement which usually happens in every area which are not 24 hours. Roaches are good communicators, as mentioned by Dr Mathieu Lihoreau of the National Centre of the Scientific Research in France.

Studies have proven that there can be a proven impact with the time within a day. These have been reconfirmed with studies on other invertebrates, these means animals without backbones and as such are the fruit fly; drosophila and even the sea slug known as apylsia. To summarise, it is the biological clock within these pests that will modulate them and influence their activity.

Where Do Roaches Actually Sleep?

These nocturnal pests loves the moist and dark,  thus they nest themselves in places like the sewage area. Pipes also help lead them to our kitchen and bathroom areas where there’s access to food and more moist area to hang out. Drainage area also becomes a favorite resting place to rest, feed, breed and a shelter to start a family. That said, some species like the German roaches prefers to simply move in and out of drains rather than staying put.

Fun Fact – A study by Gary Kroukamp and Jason G H Londt in “Ear-invading arthropods: A South African Survey, Medical Journal of 2006 and 1993 reported 100 plus cases of patients over a two year period with ear-invade and for the record, these are usually German roaches due to their size. Utterly freaky right. On Feb 1, 2017, last year in southern China, the Chengdu Economic daily reported about a roach that entered a sixty year old man’s ear.

Yes, this is true as your ear qualifies for all three criteria (small, warm and humid) according to an entomologist named Coby Schal at the Uni of North Carolina. Coby adds that roaches are attracted by volatile fatty acids which are actually a fermented chemical which can be found in bread, cheese and even in our earwax.

To conclude, ensure hygiene is maintained, sanitation is utmost crucial to keep these pests far.