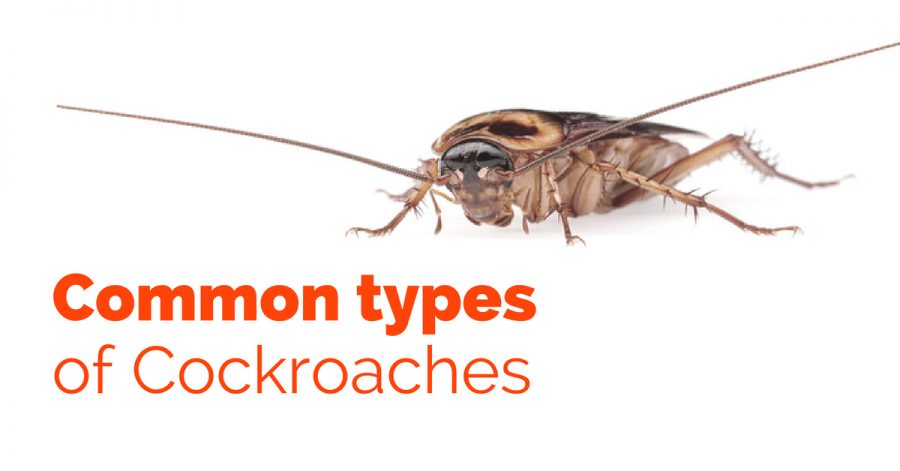 In this article, we will share 5 of the most common types of cockroaches spotted at homes.

There are over 4,000 types of cockroaches in the world, and about 70 species can be found in the United States (check out this post for interesting facts). However, most species of roaches rarely invade homes (for example, the brown-hooded and western wood cockroaches prefer to live outside in the Pacific Northwest area).


Good news is, you do not need to know all 70 species but just have to learn to identify a few common ones at home. Like any other pests, different species of cockroaches share many common characteristics; but not all roaches are created equal.

Regardless of species, cockroaches share certain types of commonalities:

Learning to identify the types of roaches is not that tough if you know where to look.

Knowing how to differentiate the types of roaches at home can help you choose the most effective roach killer methods to get rid of them (i.e Roach Spray, Roach Bait)

If we are like us, who used to think that cockroaches are all the same (we didn’t even know there are different species), this article might shed some light.


Here are 5 of the most common types of roaches found at home:

The American cockroach reddish-brown or dark brown in color and can grow up to 3 inches long. The wings of the males are longer but both males and females have the ability to take flight.

Like any roaches, they are commonly found in warm, dark areas and wet areas such as basements, drains, sewers and will eat almost anything.

They are most with the temperature of 70 degrees or higher and can survive lower temperatures with the right conditions.

While most roaches like warm and wet areas, this species prefer warm and areas that are dry, like up high (i.e behind pictures on walls) and the inside of home appliances (i.e. electronics, television, and refrigerator) and stays away from water.

[May: that’s why it’s possible to find German and brown-banded roaches inhabit in the same house, but rarely find them hiding in the same spots.] 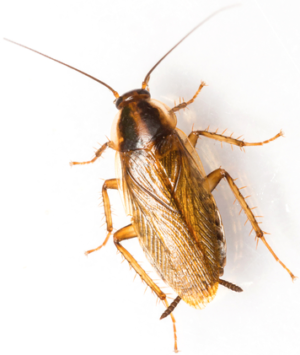 The Brown-banded Cockroach prefers starchy foods (like glue and paper based items like newspaper and old magazines) and often hides its egg cases inside or under furniture.

Color-wise, females have a dark brown body base while the males are golden-tan in color. Both genders have light bands across their abdomen and wings (that’s how they get their name).

Though more likely to jump, the males will take flight if disturbed (the females can’t fly).

>> Smaller than American and Asian cockroaches

The German cockroach is the most common type of cockroach found in America.

They are excellent at breeding where a single female can give birth to more than 30,000 cockroaches in one year (though not all of them will survive for long). 1 egg case of the German cockroach (known as Ootheca) can hatch about 20 – 40 baby cockroaches, 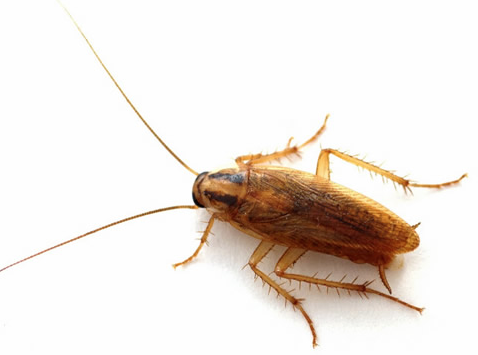 and the mother roach carries the eggs with her until they are ready to hatch (unlike other species). Making them extra persistent and more difficult to get rid of.

The German roach can only grow to one-half to five-eighths of an inch long, which is smaller than its American counterpart. Thanks to their small size, they can hide in places that other roaches cannot fit, which also makes them really hard to find when there’s an infestation.

German roaches are tan or light brown colored and have dark, parallel lines running from behind their heads to their wings. While they have wings, these roaches do not take flight.

They are usually found in environments that are both moist and warm. Common areas include the kitchens, bathrooms, near the sinks, stoves, and dishwashers.

Like other cockroaches, they eat a wide variety of things; but prefer grease, meat and other starchy foods.

The Oriental cockroach is sometimes called “water bug” or “black beetle” as they come out of drains and have smooth, shiny and dark body color. 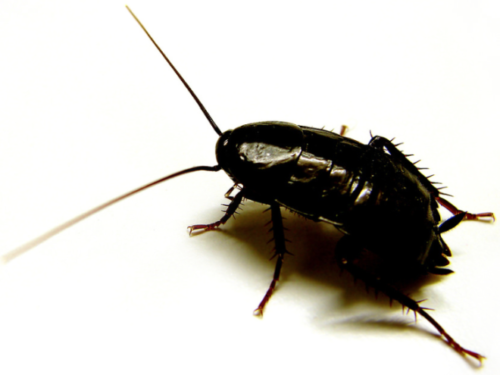 They give off a strong smell and are considered one of the dirtiest of all the cockroaches.

Oriental roaches can grow to about 1.25 inches long and neither the males nor females can fly. They are also not as fast as other cockroaches.

They enjoy moist areas, find comfort in dark spots that are out of sight from humans, which makes them hard to be gotten rid of. Indoor, they are commonly found in basements or anywhere with good source of water, and usually venture into the house in search of food. Outdoors, they are often found in sewers, in leaf piles, garages, woodpiles and near areas where pet food is stored.

>> Slightly smaller than the American roach 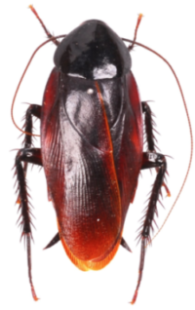 The smoky brown cockroach dehydrates quickly; hence they love places that are moist and damp. They are excellent fliers and are active at night. Lights are usually what attract them to enter homes.

Now that you know how to differentiate the common types of cockroaches at home, which of these roach species are spotted in your home?

Which species have you encountered in the past? Or what you see at home is not the same as any in the list?! Feel free to leave a comment to let us know.

Having identified the species of roach in your home is the first step; now is time to find the best roach killer to get rid of them.

What Kills Cockroaches Instantly?
What Do Roach Eggs Look Like? (And How to Deal With Them)
Do Cockroaches Sleep? Where Do Roaches Sleep?
Organic and Natural Roach Killer and Repellent
What Eats Cockroaches (Roach Predators)
23 Fascinating and Creepy Cockroach Facts
Can Cockroaches Fly? Do They Have Wings?
Bug a salt 2.0 Review (2022 Edition)