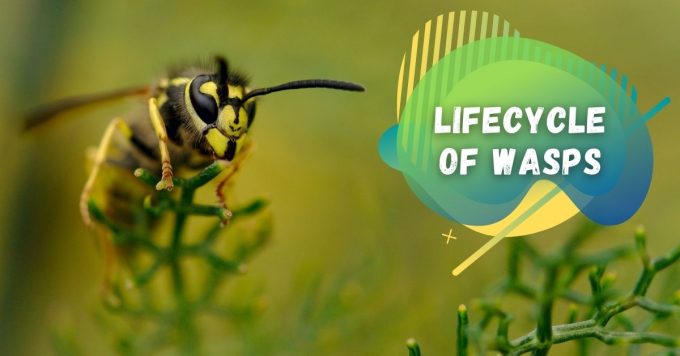 Wasps are social insects that live in colonies. The workers of a wasp nest work together to collect food, defend the nest from intruders, and assist in raising the offspring of the reproductive queen. The lifecycle of the wasps begins in the spring season and ends in the winter. It starts with the new queen wasp and ends with its death.

Every wasp colony follows a similar hierarchy. There’s one queen wasp that lays eggs, sterile female wasps, and male wasps that work as workers in the nest.

Start of the Colony

Wasps go through metamorphosis. Their lifecycle starts from an egg and proceeds to the stage of larvae, pupa, and then to fully-grown wasps.

The queen wasp builds some cells of the nest to lay her eggs. Once the eggs hatch, the new wasps will be trained to be the first worker wasps that will continue the process of building the nest, train the younger wasps and search and collect food to meet the needs of the growing wasp colony. All of this occurs in the Spring season, where the queen wasp works as a full-time egg layer and lays about 200 to 300 eggs a day. The queen wasp also releases pheromones that keep the colony intact.

Growth of the Colony

The summer season is ideal for wasps. During this season, the wasp colony grows rapidly. By the end of spring, there could be as many as 5000 wasps in the nest which can grow to a massive 10,000 when the summer reaches its peak. During this time, the wasp nest can grow up to a size of a football, which was earlier the size of a golf ball.

As the summer season approaches its end, the colony has already reached its maximum growth. The queen wasp has laid eggs that will grow into fertile male wasps and new queen wasps for the next season.

As the Autumn season arrives and the weather becomes cooler, the queen wasp approaches the end of its life. With the death of the queen wasp, the social structure of the wasp colony begins to break and scatter. The wasps that are left behind in the dying colony start to indulge in foods high in sugar like rotten fruits and lost all the commitment that they had towards the nest earlier. The new mature queens leave their nest, mate with male wasps, get fertilised and find a new place to hibernate for the winter before they start building a new colony in the spring season.

>> Also read: How Long Does a Wasp Live

End of the Colony

By the time late autumn to early winter, the entire wasp colony dies, and the nest that accommodated more than 10,000 wasps in the peak season stands empty.

The lifecycle of wasps begins in spring and ends in autumn or early winter. The summer months are when the wasps and their nests thrive. However, as the weather starts getting cooler, you’ll see less of this stinging nuisance around, and now you know why that is so – the colony starts to decline with the cooling weather.