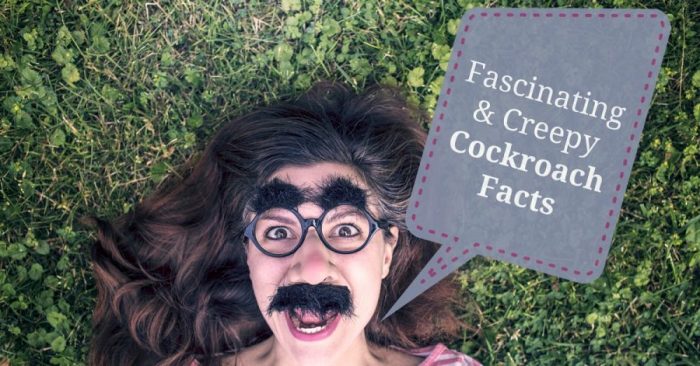 This article will uncover some of the lesser-known and seriously fascinating cockroach facts. Check out the list and see how many of these roach facts you are aware of and how many you are hearing for the first time in your life!

Cockroaches are one of the most resilient pests that have crawled the surface of the earth for decades (hint: this article will tell you how long exactly). They are known to be disgusting, filthy, creepy cause health and safety risks if they do infest your house. Amongst all the disgusting connotations, they are actually quite amazing!

While most users on this blog look for quick solutions to their roach problems at home (i.e. Best Roach Killers), we thought you will also appreciate more sharing of these fascinating facts of roaches.

Read on (if you are game enough, that is) and we are sure most of these will amaze you!


Here are 23 fascinating facts about cockroaches you need to know:

#1 Cockroaches are cannibals and eat almost anything!

It should be no surprise to you that Cockroaches will eat pretty much anything. From the food and fruit we eat, to dead insects, glue, cloth, soap, paper, wood and even feces (yes POOP!), you name it they eat it!

What you might not know is that they also turn to eating each other if they need to. Cockroach cannibalistic behavior is activated when cockroach infestations reach large numbers and food is scarce when these creepy crawlers turn to eating their own kind as both a source of food and to help reduce population size.

>> Also read: Boric Acid Products To Get Rid of Roaches

Unlike humans, cockroaches do not require their mouths to breathe. Instead, roaches inhale and transport oxygen through their open circulatory system (tiny hole in their body). After the cockroach head is cut off, clotting will seal off the neck to prevent blood loss.

Combine these with the ability to survive without food for a month and you have an insect that can live for up to a week without its head. The roach only eventually dies of thirst because they are not able to drink water without a mouth.

#3 Cockroaches are older than dinosaurs

Well, technically the average lifespan of an American cockroach is about a year, but Fossil evidence shows that roaches have been around for over 290 million years!

If you are facing roach infestation at home, it might be comforting to know that even the cavemen had to deal with roach infestations issues! The very first humans probably had the same problem and they didn’t even have any roach sprays to use!

There are some sites that still believe that cockroaches are able to walk away from a nuclear explosion. This belief first surfaced when roaches seems to be the only ones living after the nuclear explosion in 1945 that took place in Hiroshima and Nagasaki.

Thanks to the guys at MythBusters, this myth has been put through the test and busted out of the water. The dudes tested by exposing German roaches to a few levels of radiation and as a result, none of them survived the 100,000 rads of radiation.

In conclusion, it is a myth that cockroaches can survive a nuclear explosion. They can however, endure more radiation than humans and other animals. An average human being can withstand up to 800 rems (unit of radiation dose), while the persistent cockroaches can actually tolerate up to 13 times more (up to 10,500 rems of radiation!).

#5 Roaches can squeeze through the tiniest of gaps

Just like mice and rats, roaches can squeeze through the smallest of cracks!

Thanks to their amazing exoskeletons, roaches are able to fit through cracks and gaps as small as a quarter of their body height by flattening their exoskeletons.

Readers who’ve ever tried chasing a cockroach will know this. Cockroaches are insanely quick; reaching up to speeds of 1.5 meters per second and can run up to three miles in an hour. That’s equivalent to humans running around 200 miles per hour!

Their legs can move 27 times per second at top speed, so fast they can even move up walls by running faster than they do on flat surfaces.

These little creepy crawlers are fast runners by birth. A one-day-old baby cockroach, about the size of a speck of dust, can run almost as fast as its parents.

[May: being fast is perhaps the only defense mechanism, being the prey of many predators. Which also means they can spread germs and bacteria throughout the house very quickly.]

While some species of roaches can fly, others cannot (no matter how hard they try). Even those in the ‘flying’ category are actually gliding instead of taking flight.

Due to their body size, it is not conducive to speed or maneuver in the air and slow flying insect easily falls prey to birds and bats. Hence even though some of them can fly, they prefer to stay low and run using their lightning fast legs (see the previous fact, point #6).

Studies have shown that cockroaches are quite fond and attracted to alcohol with hops and sugar in it – beer. This is especially true for the tiny sized American cockroaches

That in mind, definitely not leave empty beer cans lying around overnight.

#9 Cockroaches can hold their breath for 40 minutes

Not just that, studies have also shown that cockroaches can also survive underwater for up to half an hour! (Forget about flushing roaches down the toilet).

Unlike humans, cockroaches don’t use their mouths to breath but rather use small tubes in their body called spiracles (which is why they can live without their head as mentioned earlier). These holes can be shut to prevent absorbing too much oxygen and to prevent water loss since water vapor also comes out of the holes. Hence when immersed in water, cockroaches have a lot of time to crawl to safety.

#10 There are over 4,500 species of cockroaches in the world

There are approximately 4,600 species of cockroaches found all over the world. Fortunately, only less than 1% of them share our habitat (aka pests).

>> Check this post to see the common types of cockroaches

Most of these species live in forests and woods. Either underground, inside of trees, or simply crawling on the surface of the forest floor. Some live in caves and swamps where its wet and moist. One species of roach even live in the desert, surviving by absorbing water vapor.

#11 Some cockroaches can grow over 3 inches long

Megaloblatta longipennis is the longest cockroach (according to the Guinness Book of World Records) found in Central and South America can grow up to 3.8 inches long with an 8-inch wingspan!

The giant cave Central American roaches can grow up to the same length size, but has a shorter wingspan ( around 5.5 inches).

The heaviest species (Giant Burrowing cockroach from Australia) can weigh up to over an ounce (almost the weight of a CD), and can live up to a decade.

Average cockroaches can vary in size from ½ to 2 inches long.

#12 Some cockroaches can go from egg to adult in about 120 days!

Lifespans of different species of Cockroaches varies and mature at different rates. Most roaches only take a year to become adults. German cockroach takes only slightly over 120 days to become a fully grown adult.

That would explain the ever growing population.

#13 Cockroaches are social and live in groups

Though you seldom see them moving in groups as it’s easier to be spotted that way, Cockroaches do prefer to live in groups (though not structured groups like termites).

Cockroaches poop to leave as a trial to let other cockroaches know they were there and when they find a particularly large food source, they send a signal to the others and they all gather for a feast.

#14 Some female cockroaches need only to mate once

Female roaches can store sperm and use it for the next few seasons. Shorter lifespans roaches can even store enough sperm to last them a lifetime. Some species of female cockroaches are even capable of reproducing in severe conditions when no male can be found!

#15 Some cockroaches are kept as pets

Some species like the Madagascar hissing cockroach and the true death’s head cockroach are popular pets primarily because they are odorless and require minimal care. Cockroaches are not picky when it comes to eating and do not get sick easily. All you need is a terrarium with lots of hiding spots.

Fun fact: Just like dogs, cockroaches can be conditioned. An experiment was conducted where cockroaches were exposed to vanilla or peppermint scent prior to sugary treats. Eventually, the cockroaches will drool simply by smelling the scent.

In China, cockroaches (among other insects) are deep fried and sold on the streets for human consumption. There are also many tribes that eat cockroaches as part of their diet.

Not just eating of cockroaches, China also has many cockroach farms. In fact, it is a booming industry and has helped to improve the economy of the country.

Note: Though they are likely safe to be eaten (likely due to the deep frying process), doctors warn against such practice.

#17 Japanese cockroach can survive through winter

As cold-blooded creatures, cockroaches cannot survive for long in the cold (which is why you will find them in warm spots like behind the fridge). Some cockroaches are born just during winter even die before winter ends.

The Japanese cockroach (known as Periplaneta japonica) on the other hand, has the ability to hibernate under snow condition and can withstand low temperatures of up to – 8 degrees. They can even continue living after being frozen by the weather.

#18 One species of cockroach can jump

One species of cockroach (known as Leaproach) has the ability to jump like a grasshopper, from grass to grass. The Saltoblattella montistabularis roach was discovered on Table Mountain in South Africa.

Roaches are Thigmotropic creatures that like to be touched on all sides. Preferably in contact with something solid from all sides of the body which explain why they love those crevices in your home.

In fact, they fart around 35 gm of methane a year. That is 43 times heavier than themselves!

#21 You have likely eaten a cockroach in your lifetime

Or at least, parts of it. Even the delicious snacks like the chocolate bar, peanut butter, popcorn etc. will likely have a portion of cockroaches!

Apart from being the common suspect for spreading diseases and causing harm to humans, some species of roaches living in the woods actually contributes to the well-being of the earth.

#23 There’s a cockroach that glows

The Luchihormetica luckae is a toxic roach too that has the ability to glows. It looks similar to a bioluminescent click beetle and uses its bioluminescence property as a defensive mechanism.

Now that you know these interesting facts about roaches, will you view them differently? The key points to get away from this article are perhaps that there are more than meets the eye and that not all roaches are created equal (i.e. roaches kept as pets and roaches that live out in the woods).

The next time you spot a roach, try taking a minute to share these interesting roach facts with you kids (after getting rid of the roaches of course).

These facts prove that roaches are some of the most adaptable creatures on earth, making control and elimination of cockroaches at home all the more difficult.

Feel free to read our other articles for ways to get rid of roaches.