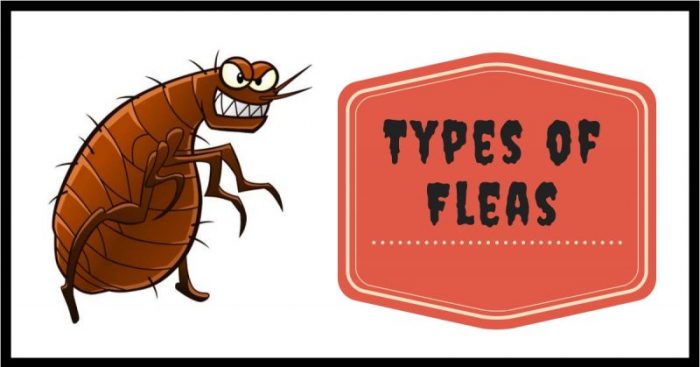 Its alarming to know that there are more than 2,000 species and types of fleas spreaded over the world. The most common species are the Cat Fleas, Dog Fleas and Human Fleas. These fleas varies in some ways, but mostly feeds on blood of humans, pets and animals.

Quick Fact – Out of 200 over types of fleas in the USA, more than 10% can be found in Florida alone.

Most of the flea species are red, brown to reddish-brown in color; and have a pancake-like flattened body shape and have hairs and spines on their legs that allows them to clinch strongly onto the fur of pets and animals. [May: If you have ever tried pulling a flea off your pet cat or dog, you’ll know just how well they can grab.]

Most of them also have strong outer shell (also known as exoskeleton) protecting them from being squashed.

Cat flea (Ctenocephalides felis) is one of the most common type of flea found at home. As the name suggests, they are most commonly found on cats. They also do host on dogs, humans and other types of animals in the wild like foxes and raccoons.

They might not be able to identify they host every time until they take their first bite. Once tasted, they will determine if it’s suitable or to drop off to seek another host (which will primarily be cats).

Cat fleas can grow up to 3mm long in size. Their body is flat and they have very long legs that enables them to leap and jump.

The cat flea goes through the typical stages of eggs, larva, pupa and adult. The white and tiny flea eggs takes between 2 to 30 weeks depending on the surrounding condition.

Fully developed flea usually stays in their pupa stage before emerging when they detect vibration, heat and carbon dioxide let out from their potential host.

Where Do Cat Flea Stay?

Cat flea usually live on the host they feed, and often mate and lay eggs on it. Their eggs or larvae will then fall off the host and develop/grow up on the furnitures around the house (i.e rugs, carpets, bed).

Cat flea might also choose to nest near their host’s resting area (i.e the cat bedding).

Dog flea (Ctenocephalides canis) feeds on both dog’s and cat’s blood, and occasionally on human.

They have the ability to jump up to 6 inches, using that ability to move from one host to another. As such, they are commonly spotted in the yard, garden and in the lawn.

How Does Dog Flea Looks?

The Lifecycle of Dog Flea

People actually didn’t think fleas will host on humans prior to the discovery of human fleas (Pulex irritans).

The human flea hide mostly in the hair and other hairy part of the human body (i.e underarm). They usually bite humans on their legs and ankles, usually giving 2 to 4 bites in a row.

The victim will be able to feel the bite immediately and the wound can sore for up to a week.

The human flea does have the tendency to move from host to another host of a different species (i.e dog, rodents). As such, the human flea poses risks of transmitting diseases.

The human flea is wingless and their color usually ranges from brownish–black to black. A fully grown human flea and reach up to 4 mm long. They uses their long and fine ‘nose’ (called the proboscis) to penetrate human skin and feed on the blood. Their eggs measures 0.5mm and are oval in shape and smooth in texture.

>> Other types of fleas

Rat Flea – There are two types of Rat Fleas, namely the Oriental rat flea and the Northern rat flea. The former originates from the Orient to the US. They stay in the coastal area. The Northern rat fleas, prefers warm and cozy environment (ie. in the house). Both species of the rat fleas feed on rats and does spread some serious diseases.

Chicken Flea – usually found sticking their heads in the skin of chickens, at the chicken’s near face or head area. These makes them looks like blackheads on the chicken but are actually the chicken fleas.

Sand Flea – As known as the Chigoe fleas, the sand fleas can be found feed on humans near beaches. They look almost like micro shrimps and usually rides on passing pets like dogs and cats to get into the house.

Sticktight Flea – Similar to the chicken flea, the sticktight flea also have the habit of sticking their heads into the skin of their host. They feed on humans and almost any types of animals like cats, dogs, rabbits and even horses. Once they have clinched onto the host, they can be pretty hard to remove. The sticktight fleas are often the cause of anemia and infections to small animals and pets.

Springtail Flea – Also known as the Snow flea, the Springtail Flea are as small as the size of pinheads. They thrive in damp area and despite the tiny body, can jump up to 4 feet high. Unlike most fleas, they don’t usually live on their host unless there’s like a skin infection or something which makes a conducive for them to live in.

Fleas have a dangerously great ability to spread diseases due to their ability to move around from one host to another.

Keeping the environment clean, making that extra effort to check and examine any suspicious insects that resembles a flea can help provide an early detection. Allowing you to take the necessary action and steps to stop them from spreading in the house, causing harm to you and your family.

What types of fleas have you encountered before? Where you able to identify some of them listed in this article? Leave a comment to share your experience with us.