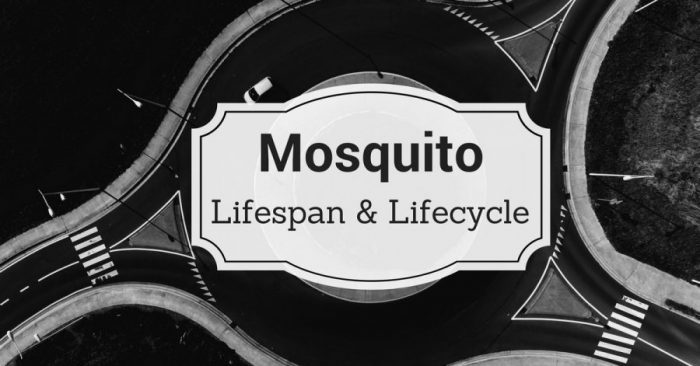 Back in science classes during the school days, most of us have studied about the basic life cycle of mosquitoes. This article will cover more details like: How long can mosquitoes live? how long does it take for them to grow from one stage to the other? Where do mosquitoes lay eggs? and more…

There are about 3,500 species of mosquitoes in the world, with about 170 of them can be found in the United States.

In fact, the entire mosquito life cycle can be counted in days (hold on to your celebrations though). A fully developed male mosquito last less than a week, while the females can live up to a couple of months (only with ideal conditions).

The problem why there’s still so many mosquitoes flying around despite their short lifespan is that they are extremely capable of living and surviving under difficult conditions. In fact, mosquitoes have been around for over 200 million years (since the dinosaurs era!). The lifespan length of mosquito and length of each stage in their life varies between species. It is also dependent on the environmental conditions (such as the moisture and temperature in the surrounding).

Mosquito lifespan begins when the eggs are laid on stagnant water and most of them hatch into larvae in 1 to 3 days (depending on the temperature).

The tiny Mosquito eggs are white when they are first laid before slowly darken to near black within 24 hours. Eggs laid on land (i.e moist soil) can last for up to a year before hatching (after the ground is flooded again).

This is the baby stage of a mosquito. The mosquito larva lives hanging upside down at the surface of the water and takes in oxygen using their breathing tubes located  at their tails. At this stage, they feed on microorganisms (like algae & bacteria) in the water and some species might even eat each other.

They move in the water by propelling themselves in a twitching motion (that’s why they are known as wigglers at this stage). At this stage, they vulnerable to predators like fish and birds.

Most larvae keeps growing at this stage for about a week, shedding their skins about 3 to 4 times before growing into a mosquito pupae (this process is known as molting). The warmer the environment, the faster the mosquito larvae will grow.

By the last shedding, the larva can reach almost ¼ inch long and enters the pupal stage within 7 to 10 days.

The mosquito pupae (also known as tumbler) doesn’t eat or do anything. They simply swim around in the water all day.

They have short and curved bodies with a large head on one end and flippers on the other end to help them swim. They live near the water surface and inhale oxygen through their little tubes (also known as trumpets).

When disturbed, the pupae will decent downwards to the deeper depth and slowly rise back to the water surface. Like the mosquito larvae, the purpae is also vulnerable to predators birds and fishes. Human acts can also post a risk to them (i.e. a layer of floating substance like oil in the water can kill them as they are unable to get to the water surface for oxygen).

It takes about 3 to 4 days for the mosquito pupal to grow and develop into the adult mosquito depending on the temperature of the water which it grows in. It is during this stage where the pupal uses air pressure to split open the cocoon and emerge as an adult mozzie.

Side note: Both the larvae and pupae cannot survive for long without water, hence should a water source dried up before they grew into adult mosquitoes, they will die.

At the final adult phase, the newly emerged mosquito will rest on the water surface until their wings dry out and body harden before taking off (that’s one reason why they lay eggs in still water).

Life of a Grown-up Mosquito

Adult mosquitoes have two large compound eyes, an antennae and a proboscis (elongated nose or snout) on it’s head. They also have 3 pairs of legs and a pair of wings.

Both male and female mosquitoes live with only two purposes in life – to breed and to feed.

Mating begins as soon as in the first few days after emerging from the cocoon, as the male mosquitoes need about a day for their reproductive parts to fully develop.

The male mosquitoes locate the females for mating by paying attention to the sounds produced by their wings.

After mating, male mosquitoes can live 3 to 5 days while the females live considerably longer (depending on the temperature and moisture it’s living environment). Under ideal conditions, females may live till 1 to 2 months.

Of course, there are plenty of predators like bats and birds that feed on mosquitoes. Pesticide sprays, traps and foggers are also used by us to combat them.

Mosquitoes don’t travel much and typically move no more than a mile from where they were hatched. They are slow fliers (about 1 mph) and can easily be blown away by wind.

Male mosquitoes feed on plant nectar while females extract blood from humans (and animals) to help develop and nourish their eggs (see this article to find out what do mosquitoes eat).

Where Do Mosquitoes Lay Eggs?

Most of the female mosquitoes can lay batches of eggs of around 60 to 100 each time. The eggs actually float together on the surface of the water like a raft. Females usually lay eggs at night and can give birth up to three times in their lifespan.

After obtaining a blood meal, the female mosquito lays eggs directly on or near water. Mosquito eggs need water to develop, hence anywhere with the water that is not likely to be disturbed for a week or two are ideal breeding grounds for them.

Some mosquito species also anticipates the next rise in water, laying their eggs on moist and soaked soil close by. If the soil remained wet enough, for a duration that’s long enough for the eggs to hatch, the life cycle of the mosquito will start.

[May: Hence never leave standing water around your house or yard because it can (and will very likely) become a breeding ground for mosquitoes.]

Now that you know where do mosquitoes give birth, what are some of the the most common spots at home that are likely to promote breeding? Will you be taking any actions to prevent them from breeding around you? Let us know in the comment.